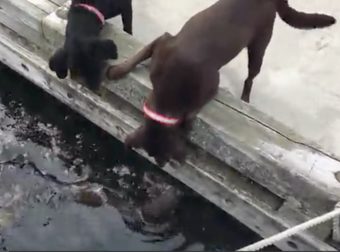 Animal friendships are the cutest, aren't they?

These dogs and their otter pal know a thing or two about that. When the dogs were sniffing around near the water's edge one day, they were greeted by a friendly otter that popped up to say hello. The three became fast friends, playing the cutest game of peek-a-boo ever.

The owner can be heard in the background narrating what he calls an “unbelievable” animal interaction. Check it out for yourself in the video below!

Aren't they the cutest? Animals really do make life so much better.